D-Day commemorations are taking place today, June 6th, across northern France, marking the 70th anniversary of an event that changed the course of the Second World War.  But what does D-Day actually mean?

When a military operation was in the planning stage, its actual date and time was not always known exactly. The term “D-Day” was therefore used to mean the date on which operations would begin, whenever that was to be. The day before D-Day was known as “D-1”, while the day after D-Day was “D+1”, and so on. This meant that if the projected date of an operation changed, all the dates in the plan did not also need to be changed.

This actually happened in the case of the Normandy Landings. D-Day in Normandy was originally intended to be on 5 June 1944, but at the last minute bad weather delayed it until the following day. The armed forces also used the expression “H-Hour” for the time during the day at which operations were to begin.

Described by wartime Prime Minister Winston Churchill as “undoubtedly the most complicated and difficult that has ever taken place”, D-Day proved to be a pivotal moment of the Second World War.

It marked the start of an 80-day campaign to liberate Normandy, an operation that involved three million troops and cost some 250,000 lives. 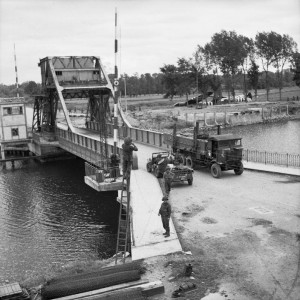 D-Day actually began just after midnight on 6 June 1944.  Six Horsa gliders carrying 181 men from the Glider Pilot Regiment landed silently to capture the strategically-vital bridges over the River Orne.  Landing gliders was tricky at the best of times, but to land at night had taken weeks of constant practice to ensure that it could go as well as possible.  The object of this action was to prevent German armour from crossing the bridges and attacking the eastern flank of the landings at Sword Beach.

Soldiers come ashore on the morning of June 6, 1944 and the rest, as they say, is history.

A re-enactment of the moment 150,000 Allied troops landed on the beach – one of five places where soldiers came ashore on June 6, 1944 – is likely to be one of the highlights of the day in Normandy today.