You are here: Home / Family Holiday News / A guide to Where to Visit in Paris

Our trip to Paris in August of this year gave us the great opportunity to re-visit some of the most famous attractions of Paris and at the same time introduce them to our children. Below is an extract from the where to visit guide we have produced to help you make the most of your next trip to Paris. See the full guide to Where to Visit in Paris here 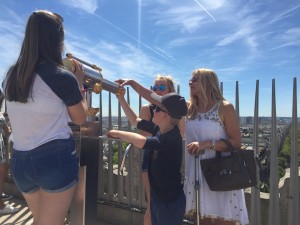 Champs-Elysees
The wide, leafy Champs-Elysees, Paris’s most famous avenue, is a focal point for the French nation, witness to momentous events such as De Gaulle’s triumphal Liberation march in 1944 and the soccer World Cup celebrations in 1998.

Jardin des tuileries
The Tuileries, at the eastern extent of the Champs-Elysees, is dominated at one end by the place de la Concorde and at the other by the mighty Louvre.  There are also views of the Eiffel Tower, Arc de Triomphe and Musee d’Orsay.

The Louvre
The Louvre is one of the largest and most famous art galleries in the world, with its legendary works and vast collection spanning thousands of years, from ancient civilizations to mid-19th century European paintings.

The main entrance is through I. M. Pei’s striking glass pyramid (1989) in the Cour Napoleon. Escalators take you down to a subterranean foyer, where you can pick up a museum plan and decide which of the three wings will be your first port of call.

Les Invalides
Visit Les Invalides to see Napoleon’s tomb and an absorbing army museum. Although its architecture is pompous, severe and authoritarian, Les Invalides was actually built to house wounded and elderly soldiers. Louis XIV was thinking of others for once when he commissioned Liberal Bruant to design the imposing building, with its 195m facade.

Summer sport in the French Alps

Christmas at Disneyland: Save 35%
Scroll to top