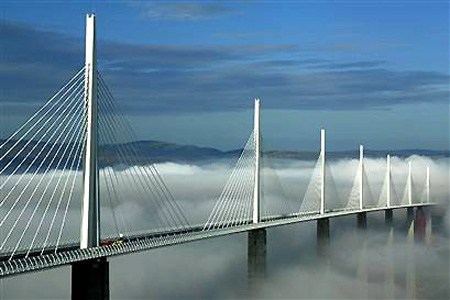 The second of our two-day routes through to the south of France, may be new to you, mainly because it takes you close to Paris, and if you are not heading for the French capital, you will want to give the whole area a wide berth, except that not only is the route through the centre of Paris just as convenient to reach the south of France and Northern Spain, but there is also so much to see.

Day One – Calais to Peronne
Leaving Calais is not difficult, all routes are well signposted and for this route you need to follow signs for the A26 to Reims and Paris. Go past Arras and take the A1 towards the capital and exit at sortie 13.1 for Peronne. Peronne is not only a convenient place to stop for lunch on your journey, but it may provide you with an interesting insight into life in a French town post war, we are in the Somme. Peronne was pretty badly hit in the 1st World war and its story is told in the museum within the castle; if you have time it is well worth a visit. The town has a couple of good restaurants that can be recommended, Hostellerie des Remparts on the Rue Beaubois and the Auberge La Quenouille which is further out of the town on the A17 towards to Arras.

Day One – Peronne to Bourges
Back on the Autoroute and heading towards Paris. As already mentioned this route takes you past Paris, not through, so here is how. As you approach Paris you will begin to see signs for Bordeaux, stick to Bordeaux throughout and you will arrive on the southern side of Paris in 45mins, depending on traffic of course!  Keep following the signs to Bordeaux until you reach Orleans and then follow signs to the A71 towards Bourges and Clermont-Ferrand.

You will shortly be coming up to Vierzon, here you can choose to divert to the Dordogne, Midi-Pyrenees or Toulouse area by following signs to Limoges and stopping the night in a pretty village called Argenton-sur-Creuse. Recommendations include staying at the former Posthouse, renamed Le Cheval Noir. Double rooms are available from £45.

If you are heading to Languedoc and beyond, stay on the A71 until sortie 7 and head to Bourges. Bourges is one of the most charming towns in all of France. During the 100 Year’s war, Charles VII was based here and much of its history is still etched into the very fabric of this town, with its half-timbered buildings and architecture. Ensure you visit St Etienne cathedral and Jacques Coeur palace by day and by night – take an illuminated walk around alleys and courtyards.

A great place to spend the night is Best Western Hotel d’Angleterre on the Place de Quatre Piliers or try Les Bonnets Rouges off Rue Bourbonnoux, where you will also find the restaurant D’Antan Sancerrois. All these and more can be found on the Bourges official tourism office www.bourgestourisme.com.

Day Two: Bourges to Aumont-Aubrac
Heading south from Bourges towards Clermont-Ferrand and the expanse of land called the Massif Central is our next destination. Soon you will reach Lozere, where you will be driving at altitudes higher than any peak in England or Wales.

I was in awe of the motorway stretch south of Lyon, but here it is even better, you literally feel like you are on top of the world. The village of Aumont-Aubrac, 200 miles south of Bourges, is a charming stone village, which unlike a few others around, has a great restaurant at Hotel Grand Prouheze. 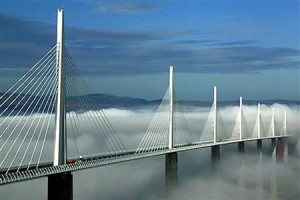 You are approximately 2 to 4 hours from your destination in the south of France, longer if you are heading into Northern Spain and Barcelona. Around 1h 30 mins south of Aumont you will come across the Tarn Valley on the edge of the Cevennes National Park, and the Millau Viaduct which spans the valley beautifully, some believe it spoils the landscape, but judge for yourselves.  The best place to see this magnificent structure is from the town below that gave the viaduct its name.

As you head down towards Languedoc, you pass vast plains that are home to sheep, whose milk produce Roquefort Cheese. Depending on where in Languedoc you are going to, you should begin to plan your own route, the road from here heads to Beziers and further south to Collioure, Argeles sur Mer and to the border with Spain. I leave the journey here with a little known fact, Languedoc produces more wine each year that Australia.