You are here: Home / Gites in the Dordogne / Driving through France, Route 2 / Millau-Viaduct 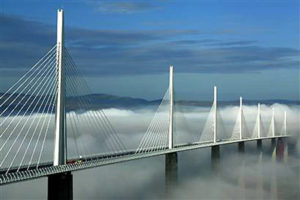 The Millau Viaduct is a work of both engineering prowess and architectural grace. Spanning the River Tam, in the south of France, Millau is a massive piece of infrastructure that appears as light as the fog that puffs across the valley, despite the superlatives that might weigh it down: It’s the tallest (1,122 feet) and longest (1.6 miles) multispan cable-stayed bridge in the world.

Its construction took only three years, thanks to a pre-fabrication process in which 2,000 sections of the steel roadway were manufactured off-site, lifted into place, and aligned with the help of a GPS. The technique also allowed for the minimum disruption of the surrounding environment — echoing the bridge’s overall goal of relieving the river valley of traffic while connecting the highway systems of France and Spain. Its remarkably slender profile and the way its graceful span emphasizes the drama of the landscape prove that cutting-edge building technology need not be at odds with the natural landscape.