You are here: Home / Family Holiday News / Observing the stars from the Pic du Midi 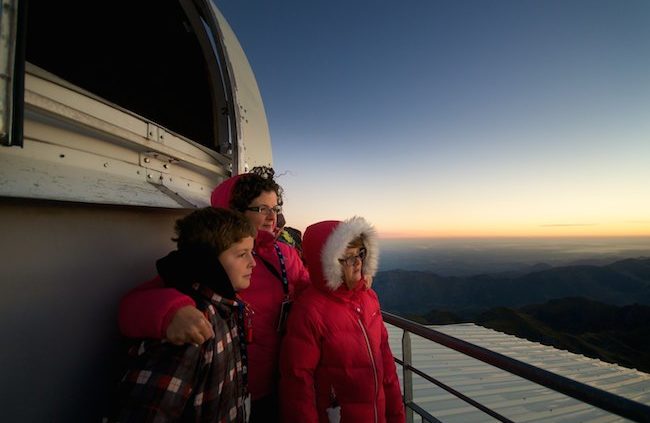 Catherine Cooper and her children are left seeing stars after a visit to the Pic du Midi to see the largest telescope in France. 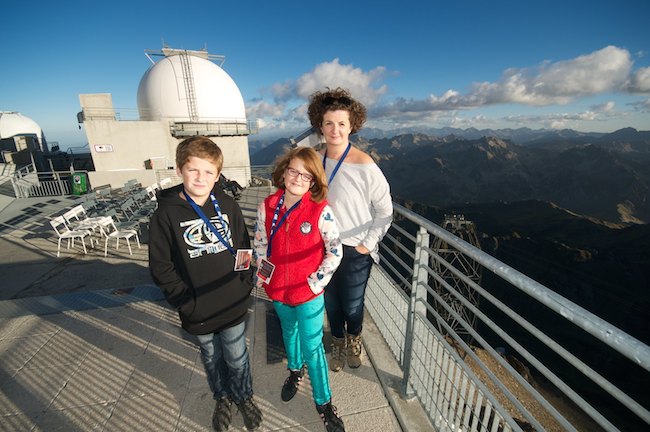 It’s not often that I will willingly get up at 6am, and it’s even less often that my children Livi, aged 10 and Toby, 12 are happy to do so. But when you know you’re getting up early because you’re going to be seeing Jupiter so clearly it will almost makes you feel like an astronaut, somehow getting out of bed isn’t so hard.

We were spending a “Nuit au Sommet” at Pic du Midi – an observatory at 2,877 metres in the Pyrenees which is home to the largest telescope in France. An observatory has existed on or close to the current site since 1873, but wasn’t open to the public until 2000, when they upgraded the cable car and opened largely as a way of generating funds when the site was threatened with closure.

The site is accessed by a telepherique from La Mongie, a ski resort halfway along the Col de Tourmalet made famous as one of the most gruelling climbs of the Tour de France. The Pic du Midi, with its concrete walls and metal domes, looms above you on a craggy peaks like a James Bond villain’s lair as you drive towards it.

At the lift office we were given “Nuit au Sommet” lanyards which we were told we were to wear at all times and the children loved – “It’s like being a VIP!” LIvi enthused. Once at the top we were taken along a bunker-like corridor to our rooms. The rooms were converted from scientists’ quarters for paying guests in 2007 and, although small, wouldn’t be out of place in a minimalist boutique hotel. Each one has a large vanity sink and mirror, crisp white linen and windows with mountain-top views, while the immaculate, modern showers and toilets are just along the corridor. 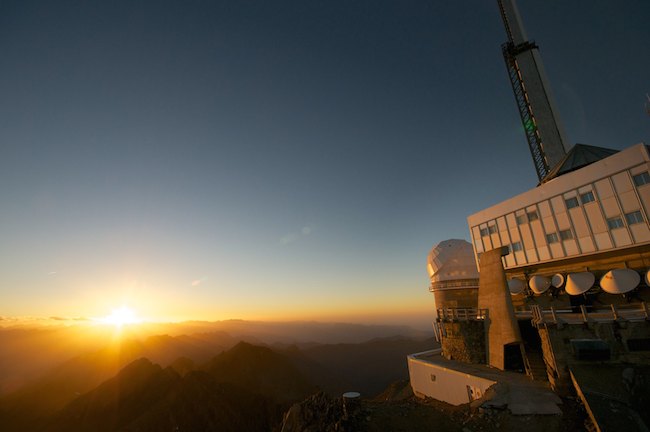 Outside there are several viewing terraces and the view is, well, almost indescribable. “It’s like being on top of the world,” Toby remarked, and it was. During the day, all you can see around you are mountains and valleys – on a clear day (as the day we visited was) apparently you can see for 400 km. There’s also a telescope which allows you to look at the sun without damaging your eyes.

We had a quick look round the museum which has some interesting footage and pictures of the observatory being built and through the ages as well as more general information about space and planets. By the time we went back outside, the sun was almost going down and it had a “staying late after school” feeling as the day visitors left and only the 27 people spending the night plus a few staff were left.

After an apero and a short safety briefing from Philippe Novvak, our guide for the evening, we went out on to the terrace to watch the sunset and for the main event – our first telescope. He pointed it at the moon and we took it in turns to look. The clarity with which you could see the contours and craters was amazing. We also looked at clusters of stars and even Mars, which glowed red.

You are told to take warm clothes and we were all wearing ski jackets but despite it having been mild and sunny during the day and there being no wind, it was by now really, really cold and the dinner back inside the building in the warm was very welcome. The champagne apero in cute miniature bottles was followed by a three-course traditional meal made from local produce – charcuterie and foie gras, followed by mixed meats and a café gourmand-style dessert.

After dinner we went back out on to the terrace. By now it was properly dark and as traditional white light could interfere with the star, planets and more that the telescope operators are looking at, we were each given plastic Pic du Midi key rings which glowed with a small red light that pressed to light up our way a little until our eyes got used to the dark.

By now the view was very different – as you looked out you could see the street lights of dozens of towns and villages way below. And above, with clear skies and no light pollution the sky was littered with stars. Using a laser pointer, Philippe pointed out various constellations in the sky and we also looked at some star clusters through the telescope but by about 10:30pm we were all getting seriously cold and decided to call it a night.

In bed, I tried not to think too hard about the fact that we were on a mountain-top nearly 3,000 metres up with the only way down closed for the night. It felt very special, but also somehow (to me at least, the children fell straight to sleep) a little scary. However in reality there was nothing for me to worry about – the Pic du Midi has five firemen on-site 24/7 and can house 600 people for five days in summer if need be or 300 people in winter for 10 days, plus it has a pharmacy and nursing staff.

Philippe had told us he would be in the Charvin Dome – which is now used only by tourist groups – from 6am to 7am for those who wanted to see Jupiter. Despite the early hour, the entire group was there. And it was amazing. Not only could you see Jupiter but the gases which surround it and even four of its moons. By 7:20, it has moved out of sight as Philippe had warned it would and we went to have breakfast. 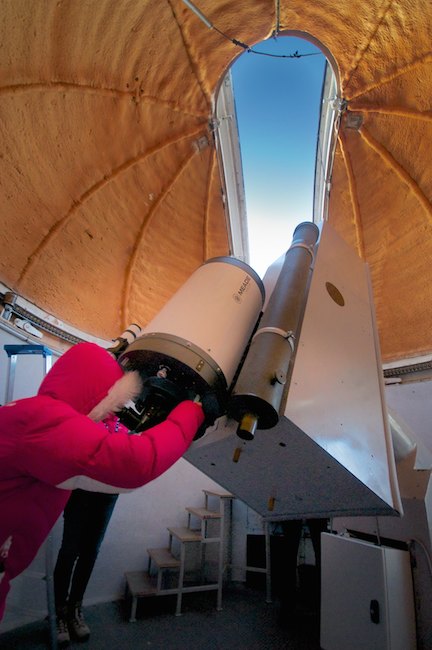 While the observatory used to host many scientists, these days apparently they do most of their observations remotely and rarely visit. The only people generally at the observatory overnight apart from tourists, the staff looking after them and security personnel are engineers operating the 3 telescopes plus other observational equipment. Their canteen is open for self-service breakfasts from 9pm to 9am, so this is where we ate.

After breakfast Philippe took us along a warren of corridors and up some winding stairs to see the Bernard Lyot telescope. With its 2-metre mirror, it is the biggest in France. Philippe told us that it is so powerful, if the world was flat, you could see the time on the clock face of Big Ben with it.

We are lucky enough to travel quite often as a family and even though for us this trip was fairly close to home, it was definitely one of the most memorable. The children were the only children in our group but were fascinated by the whole thing. However, the Nuit au Sommet isn’t recommended for children under eight – not only because there is quite a lot of listening and waiting (and it gets very cold) but also because of the effects of being at high altitude, which can be quite tiring in themselves. While there is some signage in English and other languages in the museum, all the commentary is in French. But even if your French is far from fluent, you don’t have to understand every word of the commentary to appreciate the views and the utter magic of seeing faraway planets so close up. 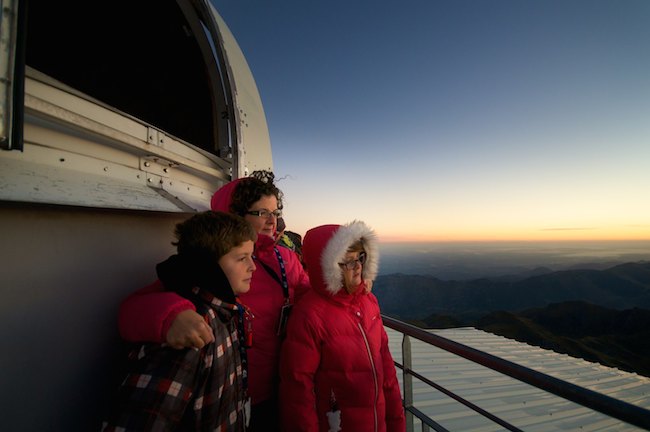 What else to do in the area

Visit Parc Animalier des Pyrenees:  We’ve been to a lot of animal parks since arriving in France and I think this is one of the best we’ve ever been to. Surrounded by stunning scenery, it has happy-looking, well-kept animals with plenty of space and only species which look like they should be there, many of which are endangered and part of breeding programmes including bears. There‘s also an open section for vultures injured by wind farms and we particularly liked the playful giant otters. Entrance 16 euros for adults, 11 euros for children. www.parc-animalier-pyrenees.com

Go to a spa: There are several thermal water spas in the area which welcome children but don’t feel in anyway overrun by them. We liked www.lejardindesbains.com in Argeles-Gazost with an outdoor jacuzzi and relaxing experience pools with music and aromatheapy and www.aquensis.fr in Bagnères-de-Bigorre with an enormous hammam, Moroccan-style tea-room and rooftop jacuzzis. In both places the children loved the large main pools with massage jets. Spa entry from around 11 euros for adults and 4.5 to 6.5 euros for children.

Visit Cirque de Gavarnie: a UNESCO heritage site surrounded by sixteen summits which are all over 3000 metres high plus the highest waterfall in Europe. You can even rent horses or donkeys for children who don’t fancy the walk. If you have time (unfortunately we didn’t) there’s also neighbouring Cirque de Tremouse which is also UNESCO listed and reputed to be equally spectacular.

Stay at Hôtel Les Rochers in Saint-Savin: a small, well-priced, friendly hotel with English owners and a great chambre d’hote evening meals in a village with stunning views of the valley. We had a family suite made up of two rooms. Rooms from 55 euros per night. www.lesrochershotel.com

Visit the waterfalls at Pont d’Espagne near Cauterets: a short, easy walk takes you to a bridge where you can watch the waterfall both above and beneath you.

Drive along the Col de Tourmalet: Enjoy the views of this iconic Tour de France col or, if you’re feeling really energetic, cycle.

Visit Lourdes: whether you are interested in its religious history and significance or not, the Sanctuary of Our Lady of Lourdes where Mary is reputed to have appeared to a peasant girl in 1858 and now the home to 22 places of worship is well worth a visit.

Best museums in France for children

10 Small French Cities for Families to Explore
Scroll to top