One stormy night in 708 (according to legend), the Archangel Michael appeared to Aubert, the Bishop of Avranches, in a dream and commanded him to build a church on a rock off the Normandy coast known at the time as Mont Tombe.    The Bishop wasn’t so keen and tried his best to ignore these night-time visitations, but quickly changed his mind after the not-so-kindly angel pierced a hole in his skull with his finger.  Mont St Michel was born. 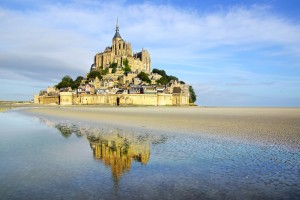 The story of the Archangel burning holes in Bishops made him fairly infamous which lead to all sorts of pilgrims making their way to pay homage at this new religious site. To cater to the crowds, a small town developed during the eighth century with a full-blown monastery to boot. The town was built to along the lines of feudal society rules, i.e. at the top was the abbey and monastery to pray to God, below this the Great Halls, stores and housing and at the bottom outside the walls fishermen and farmers’ housing.

Mont St Michel hit the headlines again in the Bayeux Tapestry when William ‘Long Sword’ took over the area, shortly before conquering England. Harold is pictured on the tapestry rescuing two Norman knights from the quicksand in the tidal flats during a battle with the Duke of Brittany.

In 1067 the monastery of Mont Saint-Michel gave it’s support to Duke William of Normandy in his claim to the throne of England and the monastery was rewarded with gifts from English side of the Channel, including a small island off the south-west coast of Cornwall. This island was modelled after the Mont and became a Norman priory named St Michael’s Mount of Penzance.

The Mont grew in reputation and because of its unique position of being an island only 600 metres from land this position made it readily defensible as an incoming tide stranded and occasionally drowned any would-be assailants. The Mont remained unconquered during the 100 years war and this resolute resistance inspired the French, especially Joan of Arc.

There was a minor blip in the Mont’s history when it was turned into a state prison by Louis XI, however by 1836 influential figures—including Victor Hugo—had launched a campaign to restore what was seen as a national architectural treasure. The prison was finally closed in 1863, and the mount was declared an historic monument in 1874.

Mont Saint-Michel and its bay were finally added to the UNESCO list of World Heritage Sites in 1979 and is one of the most popular tourist attractions in the world.

Not bad work from Bishop Aubert. He would probably now say that it was almost worth the hole in the skull.

Find out more about our Gites in Normandy

Ferry v. plane – how should families travel to France
Scroll to top