Normandy’s capital is a city of cobbled streets, tall timbered houses and Gothic churches, captured by the painter Monet in his Rouen Cathedral series. Joan of Arc was executed here, and the heart of Richard Coeur de Lion is held in the cathedral’s crypt.

The Romans established a settlement on the site of today’s Rouen in the 1st century ad, calling it Rotomagus. In the Middle Ages, Rouen became the seat of the Dukes of Normandy, who won the English throne in 1066. Later, it was at the heart of the Hundred Years War between the French and the English. 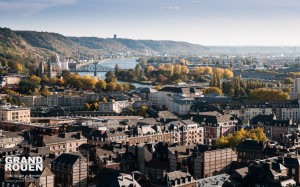 One of the most famous episodes of the war took place in May 1431, when Joan of Arc, after reviving French fortunes in the siege of Orléans, was burnt at the stake at the instigation of the English. Merchant trade has been key to Rouen’s development over the centuries, funding many of the timbered and gabled tradesmen’s houses in the city. The city was heavily bombed during World War II and many historic buildings needed meticulous renovation. Today, Rouen has the fourth largest port in France, despite being so far inland. The city sits on the Seine, 86km from the estuary at Le Havre. The contrast between the working docks along the river and the Gothic spires and quaint old streets of the city heart is amazing.

Any trip should begin opposite the cathedral with a visit to the tourist office, housed in Rouen’s oldest Renaissance building, the former tax collector’s office, dating from 1509. Cathédrale de Notre-dame, Rouen’s cathedral is one of the great churches of France, known across the world thanks to painter Claude Monet. Monet worked on the paintings from the second floor of what is now the tourist office. The cathedral’s Gothic architecture spans 400 years, from the mid-12th to early 16th centuries. No visit to Rouen is complete without a stroll under the 14th century Gros Horloge, a huge, one-handed, ornamental clock mounted on a sumptuously carved arch straddling the road of the same name. Once part of a nearby belfry, the remarkable timepiece was moved to its present position in the 16th century, after locals complained that it was impossible to see the clockface in the narrow streets.

As mentioned above Rouen is also the city of Joan of Arc, and the tales surrounding France’s greatest folk heroine would alone be lure enough for visitors. On the place du Vieux Marché, a short stroll from the Gros Horloge, a large cross marks the spot where Joan of Arc was executed. The nearby Église Jeanne-d’Arc is a stunning combination of modern slate and copper work on the outside, with light from Renaissance stained-glass windows within. The windows were salvaged from the earlier church of St-Vincent, destroyed during World War II. The wonderful contemporary sculpture was inspired by the saint’s martyr’s pyre. The remains of the two towers in which Joan was imprisoned from Christmas 1430 until her execution in 1431 can be seen on rue du Donjon.

Visit Rouen during the last week in May to take part in the Joan of Arc festival, which usually coincides with the city’s main cultural festival. On the Sunday closest to 30 May local children throw flowers into the Seine from the Boïeldieu Bridge, the spot where Joan’s ashes were scattered.

Please use this link to read more about Normandy

Futuroscope launches a bar above the clouds

The Sistine Chapel of Prehistory – Lascaux, Dordogne
Scroll to top