Cycling is a great way for kids to experience a different way of exploring a country and having spent many summers on cycling holidays with my family – both as a child with my parents and encouraging my children to do the same – you really appreciate how great France for this type of activity holiday. 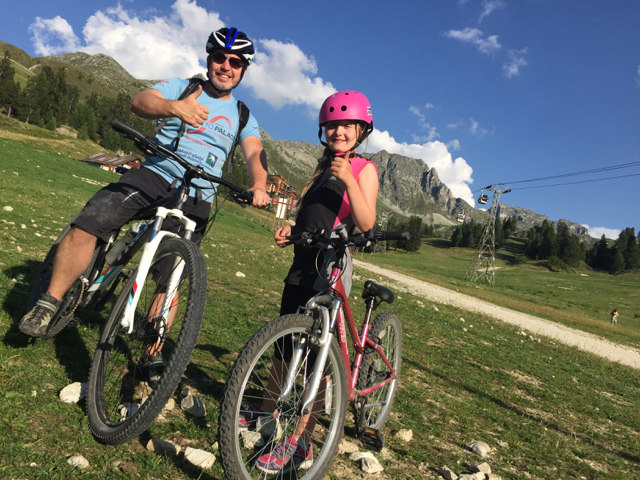 Choosing a route for cycling with kids

Taking a challenging, mountainous tour in the Alps will certainly have its appeal, and if you have teenagers who are also experienced cyclists, they may well enjoy testing their abilities. However, some of you will be cycling with kids for the first time, so it goes without saying that you will need to factor their age and level of ability to get the most out of your break.

If you have five to 10-year-olds, for example, who can cycle – but perhaps not as far as you’d like to in a day – you might want to opt for an easy route which is fairly flat with just a few low level hills. In short, subject to the age and experience of the kids, it’s generally a good idea to keep mileages on the low side and pack in the points of interest and ice-cream stops.

With just a bit of advance planning, you can create the perfect cycling trip to suit every member of the family, from teens to toddlers to parents. I’ve outlined below the different regions that my family and I have cycled in and the most popular areas that I can recommend for the best family cycling in France.

The French are good at designated cycle paths, including some incredible long-distance cycleways which offer a couple of thousand kilometres through some beautiful areas.

Western France, from the Vendee south (in the Pays de Loire), through the Nouvelle Aquitaine (Charente and down south of Bordeaux) offer brilliant family-friendly cycling holidays in France.

There are many cycle paths through scented pinewood forests, along coastal paths and round inland lakes that make the cycling easy for the grown-ups and children alike.  The land is fairly flat and the cycle paths well maintained.

There are lots of picturesque roads to explore by bike in Brittany, especially along the coast, but not a great deal of family-friendly cycle ways. Best for cycling holidays with older children who can manage the narrow roads and on-coming traffic.

Family cycling in the Vendee

This region is perfect for family cycling with children of all ages. There are oodles of family-friendly cycle paths that run along the coast, complete with cycle stations with tools and pumps to blow up the odd tyre! The weather is kind, not as hot as the south of France although the height of summer can be roasting. Easy access to cycle to the beaches and plenty of places to lock up your bikes or take them onto the sand with you if you wish. There are lots of cycle hire shops in all the resorts so you can hire when you get there or take your own. Great for families with children of all ages.

Family cycling in the Charente

Having done holidays both inland and at the coast, there are plenty of family cycling options. As mentioned, there are lots of country roads to explore inland, cycling between small villages, through vast vineyards and rolling fields of sunflowers. Stop for breaks at the small cafe’s en route, enjoying lunch or just an ice-cream.

The cycle paths along the coast are similar to those in the Vendee region – dedicated family cycle ways that run alongside the long stretches of beach. Holiday around La Palmyre for access to long stretches of cycle ways next to the Cote Sauvage. But do your homework about where you stop – some stretches have a dune to climb over!

This area is tricky with the heat and traffic – August can be exceptionally hot and busy. You have some more mountain biking options here but I would avoid road biking with the family – it’s steep, hot and busy.  Keep to early morning rides to local small villages for your baguette pick up!

Family cycling in the Loire

There’s only one place to cycle in the Loire and that’s the ‘La Loire à Vélo’, a unique, 800km cycle route. (You don’t have to do it all!). It stretches from the heart of the Loire Valley all the way to the Loire’s Atlantic estuary, from Cuffy in the Cher département to Saint-Brévin-les-Pins, where the Loire flows into the Atlantic Ocean. A large stretch of the Loire is a UNESCO World Heritage Site and all along La Loire à Vélo, you stick closely to the River Loire with it’s fabulous views. The route alternates between cycle paths and quiet roads, all well signposted and well-surfaced and perfect for families to hop onto and discover certain stretches. The only trail of its kind, it attracts about a million riders every year from all over the world.

Running from the city of Toulouse down to the Mediterranean port of Sète, the Canal du Midi is a beautiful stretch of inland waterway in Southern France.

Named as a UNESCO World Heritage Site in 1996, visitors can enjoy cruising, walking or cycling along this canal. Construction began in 1667, under the reign of Louis XIV and it opened on May 15th 1681. Pierre-Paul Riquet designed and built the Canal Royal de Languedoc (as it was then known) with the aim of transporting wheat, wine and textiles. Two centuries later, the canal was linked to the Canal du Garonne and this waterway then reached the Atlantic.

The Canal Royal de Languedoc was renamed the Canal du Midi during the French Revolution, and by 1856 it carried over 100,000 tonnes of cargo and a million passengers a year. However, by the following year commerce had almost dried up due to the opening of the Bordeaux to Sete railway.

The combination of stunning scenery, wide variety of nature, avenue of trees and of course the sheer engineering prowess and unique locks that run the length of the canal, have given the Canal du Midi a renaissance. Since the 1990s tourists have flocked to the world renowned stretch of water and its popularity continues to grow.

The canal passes through a great number of wine growing areas, including the Herault, the Aude, Minervois and Corbieres. You will also see many fields of sunflowers, meander through little villages and past cafes and see a wide variety of wildlife.

In summary, probably the best cycling holidays in France with the family are in the central and west areas of France – the Loire, the Vendee and the Charente, which all have dedicated cycle ways, away from the hustle and bustle of the roads.