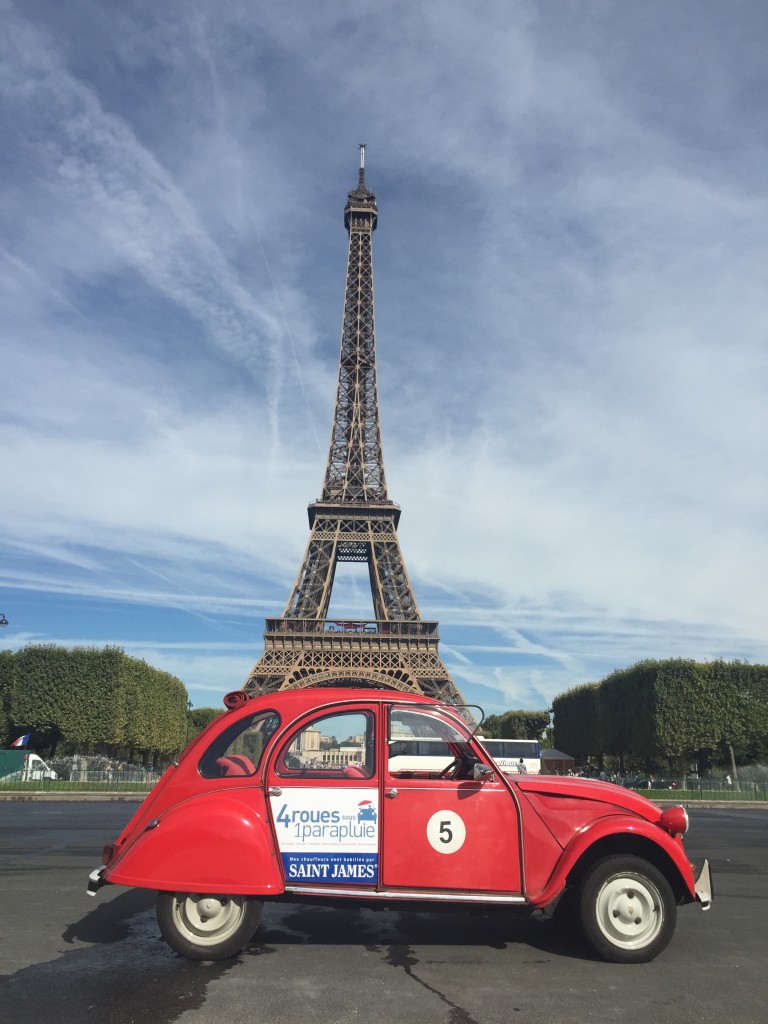 Paris, 10th of August 2015 at 10am. A beautiful hot, cloudless sunny day in the French capital. Location – the entrance to Les Jardins des Tuileries avec famille. We were here to meet our rides, two 30-year-old Citroen 2CVs whose drivers would be our tour guides around central Paris this morning.

This Parisien 2CV tour company named ‘4 roues sous 1 parapluie’ (four wheels under one umbrella) after how the chief of Citroen in the 1930s described the 2CV, criss-crosses the capital each day with tourists.  The story of the 2CV goes that Pierre-Jules Boulanger, asked his lead engineers to design a city car that can carry four people, 50kg of potatoes at 60 km/h… and with enough head space that PJB (as he was known) did not have to remove his hat whilst driving. The bubble shape was implemented, giving the 2CV its iconic look resembling 4 wheels under 1 umbrella.

As we approached the entrance to the gardens we could see tourists flocking from around to something that had caught their eye, as we got closer we could see the objects of their desire… Sophia and Jules; our 2CVs had arrived.

Making our way through the crowd, feeling like celebrities,

we met our drivers dressed in Breton shirts and berets, and a few introductions later we were off.

‘Driving around the famous parts of Paris in an open-top 2CV was the best thing we did in Paris’ said Georgia (14). We were 5 and needed two cars, the 2CVs will comfortably fit 4 people including the driver.

We had an 11 and 9-year old also with us who absolutely loved the special view of Paris you get from the car.  The drivers were very informative and even having visited Paris on many occasions throughout our lives we learnt a lot more about the history of this great city.

Isabella (11) commented ‘My favourite part of the tour was discovering the beautiful Alexandre III bridge with its 4 bronze statues’.

Stopping for photos along the way made the tour personal, and every where we did stop drew interest from all around. The 2CV, whose production stopped in 1990, is today’s perfect vehicle to enjoy Paris.  More information and to book your tour in a 2CV visit their website